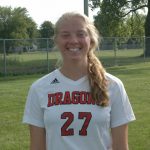 The New Palestine girls soccer team suffered its first defeat of the season, dropping a 3-1 decision Saturday morning to Franklin Central. Jordan Reid scored on a feed by Meaghan Matus in the first half to give the Dragons a lead at the intermission. The goal, which came midway through the first half, came as 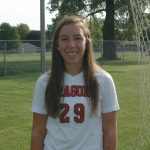 The New Palestine girls soccer team posted a Hoosier Heritage Conference victory Wednesday, blanking Yorktown 4-0 at NPHS. Olivia Lambdin scored twice, Corrin Neese had two assists and Jordan Reid had a goal and an assist to pace the victory. Katie Settergren tallied the winning goal with 15 minutes left in the first half, lobbing 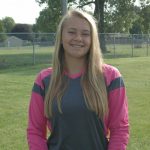 The New Palestine girls soccer team won two games Saturday, both by 6-0 scores. The Dragons beat Centerville in the opening game, then beat Decatur Central in the afternoon, to sweep the doubleheader. Goalkeeper Haley Weinrich had the first two shutouts of the season. Against Centerville, the Dragons had six different goal scorers. Meaghan Matus had 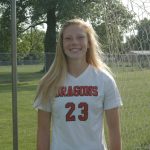 Jordan Reid scored twice to lift the New Palestine girls soccer team to a 3-1 victory over Triton Central in its season opener Wednesday at NPHS. Reid scored on a feed from Katie Settergren to give the Dragons a 1-0 lead at halftime. Olivia McKilligin scored early in the second half, making a run with the ball

The Dragons’ girls golf match against Whiteland and Knightstown, as well as the girls soccer opener at Perry Meridian, have both been postponed due to inclement weather. Both matches were scheduled for Monday, Aug. 15. Reschedule dates have yet to be announced. The Dragons’ golf invitational Saturday at Lapel was also rained out. The golf team

Multiple Teams · May 24 Sign up for NPHS summer camps 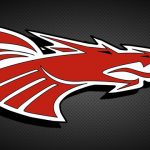 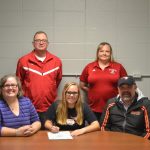 NPHS girls soccer player Emma Carmichael has committed to play soccer at Anderson University. Carmichael was a key player for the Dragons, who won an HHC championship this season, and won back-to-back sectional titles in her sophomore and junior seasons. She will play at Anderson, an NCAA Div. III school that plays in the Heartland Collegiate 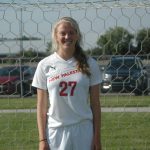 Four members of the Dragons’ girls soccer team were named All-State by the Indiana Coaches of Girls Sports Association earlier this week. They helped lead the Dragons to a 14-4 record and a Hoosier Heritage Conference title earlier this year. Junior midfielder Meaghan Matus was named first-team All-State. She had three goals and four assists this season.