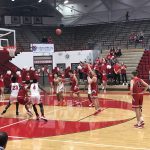 Senior Maximus Gizzi broke New Palestine’s 41-year-old career scoring record Saturday, as he tallied 25 points for the Dragons in a 75-61 loss at Southport. Gizzi’s 25th point Saturday was the 1,286th of his NPHS career, breaking a mark held by Tom Giles since 1979. Gizzi also had three steals, tying Ryan Curry’s record of 102

The New Palestine wrestling team won three individual championships at Saturday’s New Palestine Invitational wrestling meet, powering the Dragons to a second-place finish in the eight-team event. At 113, Peyton Covington (6-3) won his title match by fall in 1:46. At 120, Christian White improved to 22-1. He won his semifinal match in 52 seconds 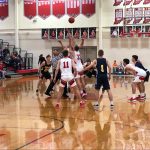 The New Palestine boys basketball team used its strength inside early and strong free throw shooting late to defeat 3A No. 5 Delta 73-65 Friday at NPHS. It was the Dragons’ first home game in 27 days after eight straight away from home, and their homecoming was an impressive one. Maximus Gizzi scored 13 of 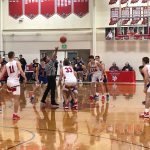 After eight consecutive games away from home, the New Palestine boys basketball team returns home Friday to face the Delta Eagles in a Hoosier Heritage Conference contest. The Dragons then travel to Southport for the first time ever in the regular season for a Saturday tilt. The Dragons come in after a hard-fought 74-73 overtime defeat

The New Palestine girls basketball team led at several points, but eventually dropped a hard-fought 56-50 decision at Class 4A No. 4 Fishers. The Dragons led 13-10 after a quarter, trailed 30-28 at half, but then re-took the lead 40-38 going into the final period, but Fishers went on a run early in the fourth quarter 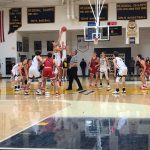 The New Palestine boys basketball team dropped a 74-73 decision in overtime Saturday night at 2A No. 3 Shenandoah. The Dragons’ Maximus Gizzi stole a pass on Shenandoah’s final possession of regulation to send the game to OT tied 65-65, but the host Raiders hit 7-of-10 from the line in the extra session. Dawson Eastes gave NP a

The New Palestine girls basketball team rallied from a fourth-quarter deficit to beat Yorktown 50-42. The Dragons outscored the host Tigers 17-6 in the final quarter to seize the victory. Trailing 36-33 going into the final eight minutes, Michaela Jones opened the fourth quarter with a 3-pointer to tie the game. The Dragons then seized the