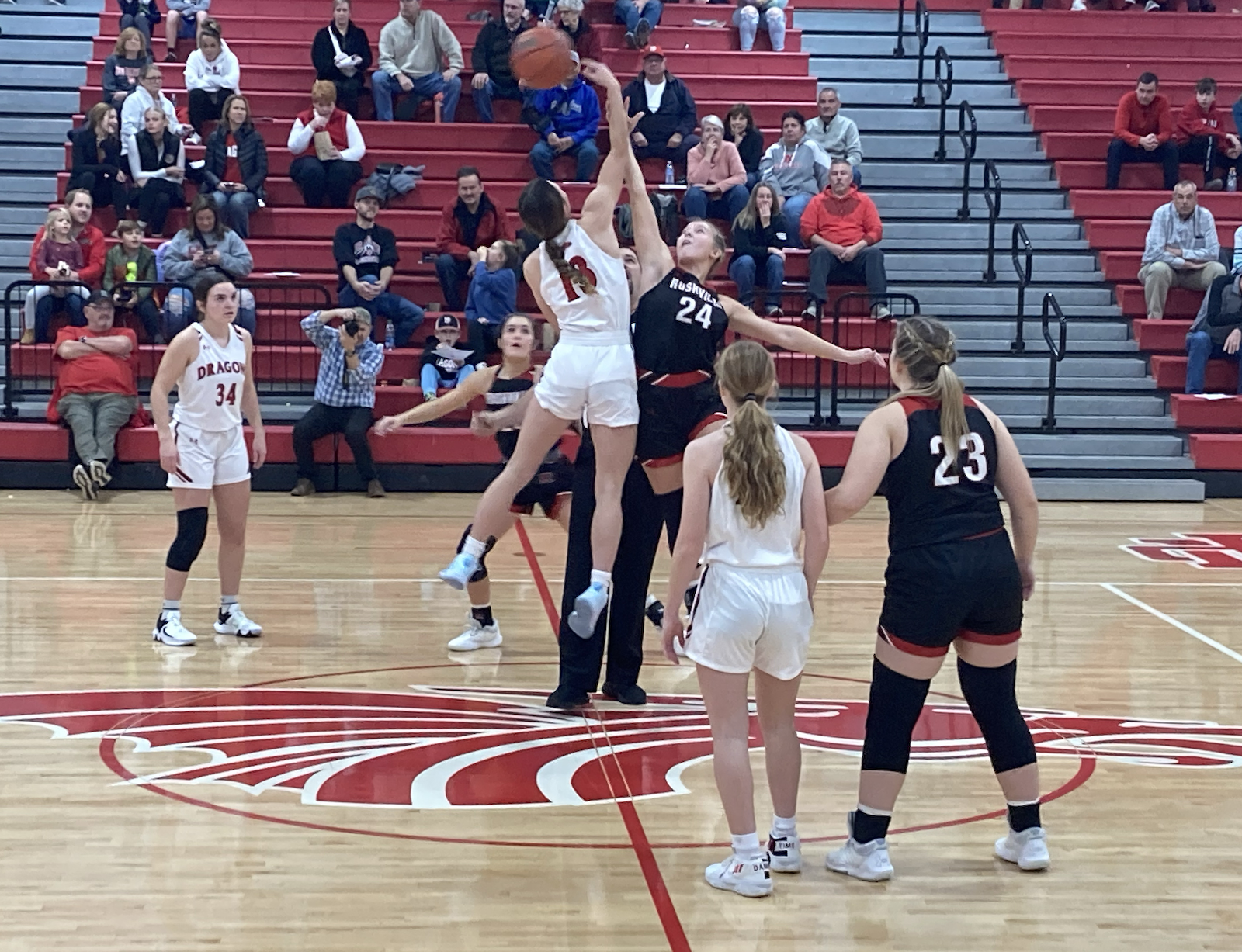 The New Palestine girls basketball team hit big shots down the stretch Tuesday to win a back-and-forth 63-56 decision over Rushville. The Dragons held an eight-point lead going into the fourth quarter after Isabella Gizzi drilled a 3-pointer at the buzzer, but Rushville immediately rallied to tie the game within a minute and take a 41-39 lead two minutes in. The Dragons rallied to tie the game at 43, but Rushville's Kylee Herbert drilled a 3-pointer to put the Lions up three with five minutes left. Gizzi immediately answered with a triple to tie the game. The Dragons then seized control, getting back-to-back defensive stops. On the other end, Gizzi found Kylee Beranek open on the wing for a 15-footer that put the Dragons up 48-46. On the next possession, Vivian Miller drilled an open 3-pointer to push the lead to five. As the Dragons continued to get defensive stops, Rushville began to foul in the last two and a half minutes. The Dragons then salted the game away by hitting 10-of-12 from the line. Tylar Whitaker put the exclamation point on the game with a steal-and-score in the closing seconds to put the Dragons up nine. The game was a back-and-forth affair throughout. The Dragons built a 6-0 lead two possessions in on 3-pointers by Allie Blum and Miller, but Rushville answered with an eight-point run and led 14-11 after a quarter. The teams traded second-quarter runs - the Dragons went up 17-15 on a run fueled by a Blum 3-pointer. Rushville immediately answered with a six-point run to go up four. The Dragons answered with a basket by Gizzi in transition, a steal and a 15-footer at the horn from Whitaker to tie the game. The Dragons eventually built an eight-point lead late in the third quarter with another defense-fuled run, with Sadey Hughbanks hitting a late shot and Gizzi taking a handoff from Miller and draining a 3-pointer at the buzzer. Gizzi led the Dragons with a season-high 28 points, scoring 21 after halftime. She had 11 points in the third quarter and 10 in the fourth, including hitting 12-of-14 from the line. Hughbanks added a career-high nine points. Miller and Blum added eight each. Whitaker tallied a season-high six points. Beranek scored four. Munchel led Rushville with 20 points. The Dragons also won the JV game 41-40, with Kendra Moore scoring 13 points to lead the way. The Dragons are now 3-3 on the season. They next play Saturday morning against Whiteland, with a 10 a.m. JV start, followed by the varsity at 11:30 a.m. The start time has been moved up an hour from previously scheduled to accommodate Whiteland's football team participating in the State Finals that day.