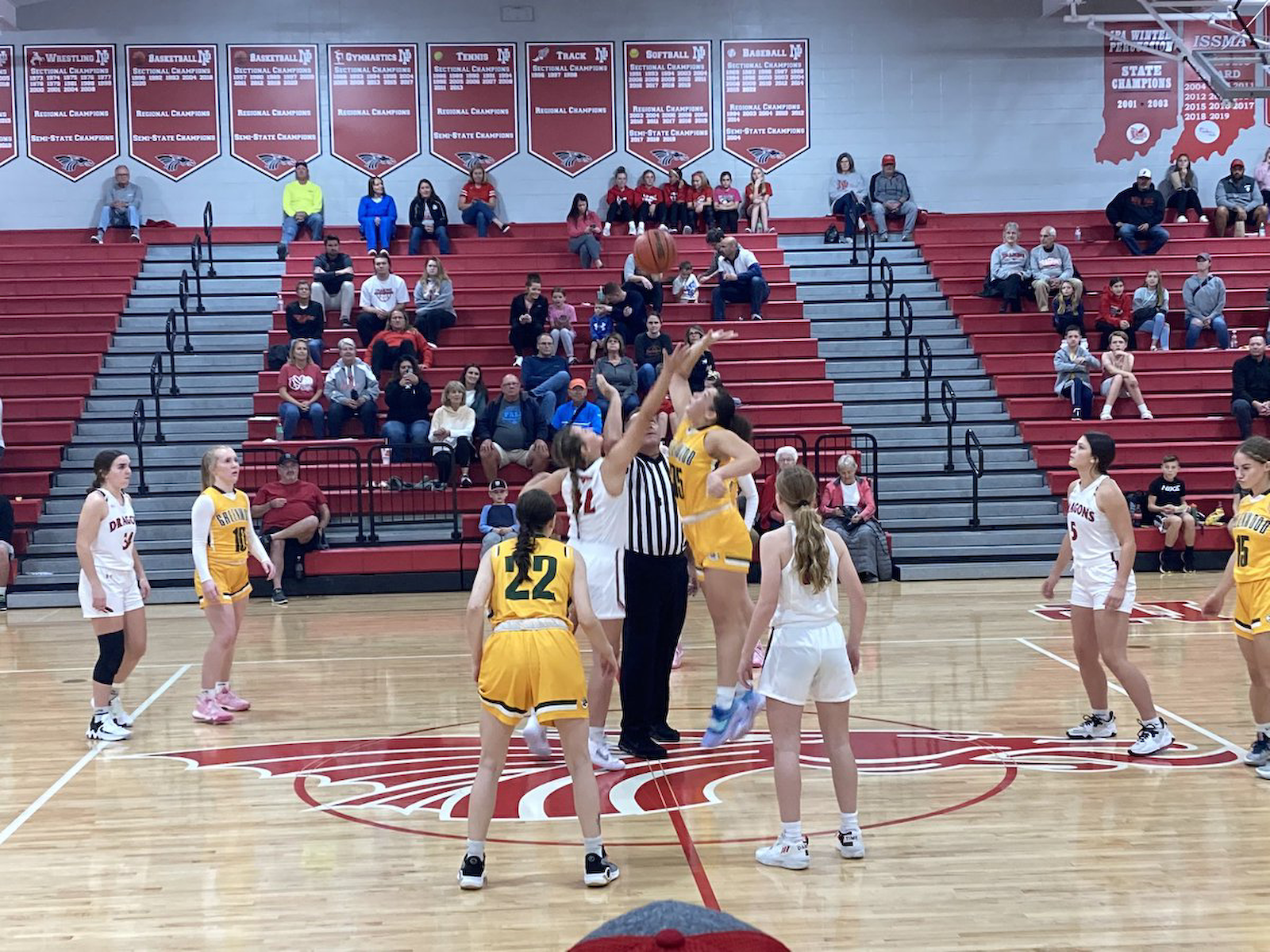 The New Palestine girls basketball team continues its season-opening homestand with two games against Rushville and Whiteland. Tuesday: Dragons (2-3) vs. Rushville (3-2) Time: 6 p.m. JV/7:30 p.m. V Site: NPHS gymnasium Tickets: https://public.eventlink.com/tickets?t=23574 Audio: NewPalRadio.com Video: https://www.ihsaatv.org/newpalestine ($) Saturday: Dragons (2-3) vs. Whiteland (2-4) Time: 10 a.m. JV/11:30 a.m. V Site: NPHS gymnasium Tickets: https://public.eventlink.com/tickets?t=23851 Audio: NewPalRadio.com Video: https://www.ihsaatv.org/newpalestine ($) SETTING THE SCENE The Dragons continue a four-game homestand this week with games against Rushville and Whiteland. The Dragons are looking to snap a three-game skid. The Dragons play six of their first eight at home. The Dragons trail the all-time series 38-9. They are 2-2 since the series resumed in 2018-19, but have dropped the last two games, including a 46-44 loss last season. The Dragons are 1-0 against the EIAC this season, having beaten Connersville 52-32 in the season opener. Against Whiteland, the Dragons have won three straight matchups over the last four seasons, including a 56-49 road win last year. DRAGONS NOTES Guard Isabella Gizzi became the Dragons’ career scoring leader in Tuesday’s game at Greenwood. Her 23 points gave her 1,173 for her career, eclipsing a record held by her mother - Dragons coach Sarah (Haynes) Gizzi - since 1994. They are two of the five 1,000-point scorers in school history. The five have come from three families - in addition to the Gizzis, Debby and Linda Batz, as well as Raegan McMurray, have eclipsed the 1,000-point mark at NPHS. Isabella followed with 26 points against Warren Central and now has 1,199 for her career. The Dragons dropped two games to large Marion County schools this week. Thursday, they dropped a 60-42 decision to Warren Central despite 26 points from Gizzi and eight from Vivian Miller. In Tuesday’s 58-54 loss to Franklin Central, the Dragons battled back from a 21-13 halftime deficit to take a 50-49 lead in the fourth quarter, but ultimately fell in the closing stretch as the Flashes hit back-to-back 3-pointers to re-take the lead for good. In addition to Gizzi’s team-high 23 points, juniors Allie Blum and Miller scored 11 points each for the Dragons at FC. Each hit three 3-pointers. It was each player’s second career double-digit scoring game. Isabella joined her brother Maximus as NPHS career scoring leaders, as Maximus became the Dragons’ boys scoring leader in 2020 with 1,612 points. He currently plays at Marian University. NPHS is one of eight schools statewide where siblings are the boys and girls basketball career scoring leaders. The Dragons’ 41 points in the second half Tuesday were a season-best. SCOUTING THE LIONS The Lions are 3-2, having dropped a 45-43 decision to Beech Grove Saturday and a 54-50 contest Friday at Mt. Vernon. They are led by sophomore Leonie Boyer, who averages 18.4 ppg and 7.8 rpg. Senior Briley Munchel tallies 13.2 ppg. SCOUTING THE WARRIORS Whiteland went 1-1 in the Johnson County Tournament last week, beating Edinburgh 71-30 before falling 40-30 to Center Grove. Junior Gwen Higdon (10.2 ppg, 5.2 rpg) leads the Warriors, while freshman Sophia Dyer adds 7.2 ppg and 5.0 rpg. Whiteland plays Wednesday against Decatur Central. NEXT UP The Dragons finish their homestand Tuesday against New Castle, opening HHC play. They then hit the road for four straight Dec. 3 at Delta.