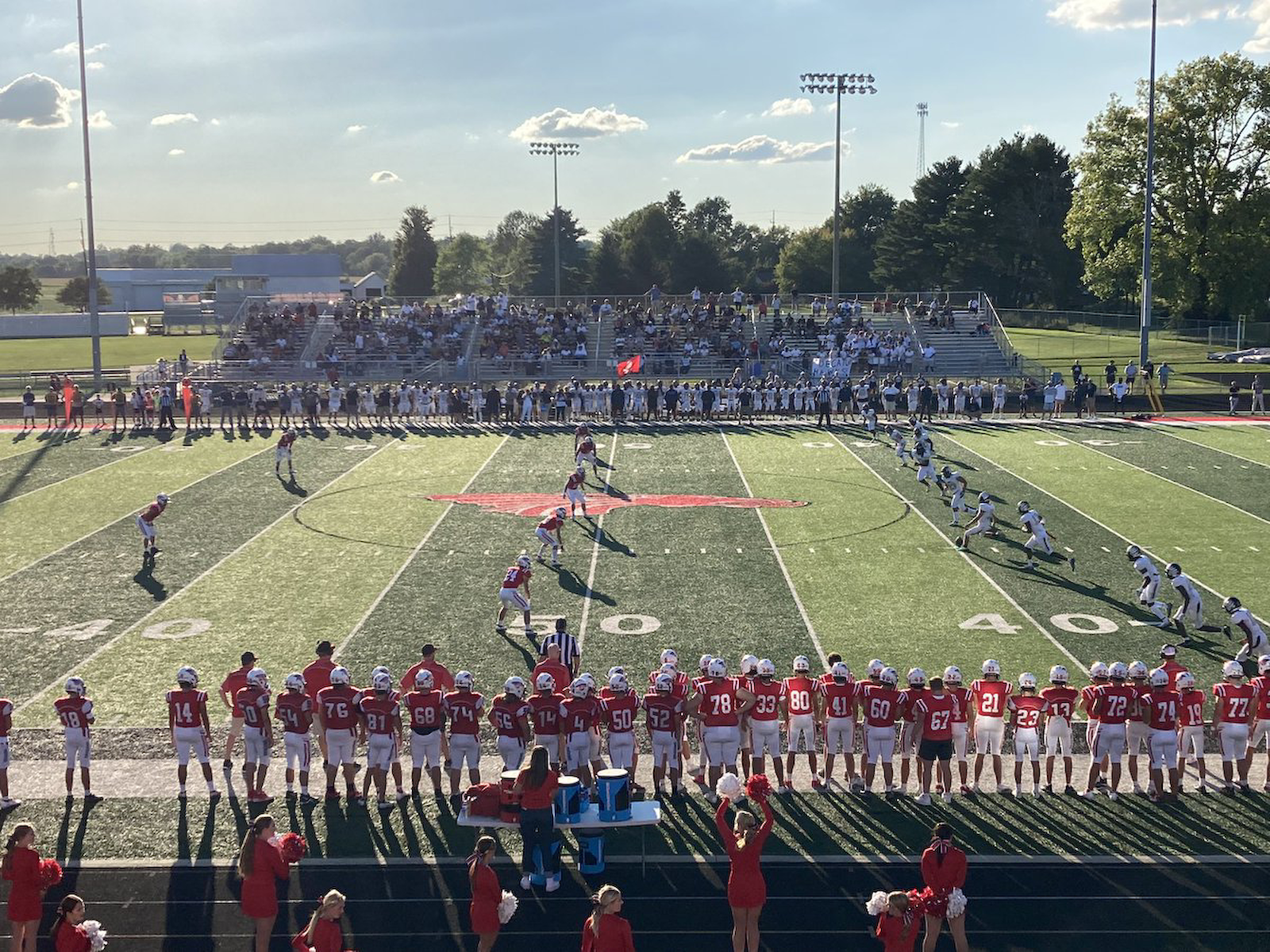 The New Palestine football team concludes a three-game road swing this week as it travels to Pendleton Heights for a 7 p.m. kickoff. Game info 4A #1/1 New Palestine Dragons (4-0, 2-0 HHC) at Pendleton Heights Arabians (2-2, 1-1 HHC) Time: 7 p.m. Friday, Sept. 16 (gates open 6 p.m.) Site: John Broughton Field, Pendleton (directions: https://goo.gl/maps/wuRv4hR4N3UZ5LWGA) Tickets: $6, available at the gate or in advance online at spicket.events/arabians. Purchasing tickets in advance is STRONGLY ENCOURAGED by Pendleton Heights to avoid lines at the ticket window. Broadcast audio: NewPalRadio.com (pregame coverage begins at 6 p.m.) SETTING THE SCENE The Dragons and Arabians meet for the 36th time in their histories, the second-most frequently-faced opponent in New Palestine’s football history. Only Mt. Vernon (61 meetings) has more matchups with the Dragons. The Dragons hold a 22-13 record in the all-time series, including 10 straight wins dating back to 2013. The Dragons are 20-2 against PH since 2003. NP won last year’s meeting 38-3, with Isaiah Thacker tallying a career-high 138 receiving yards, including a 72-yard touchdown. The Dragons are in possession of the HHC’s Helmet trophy for the first time since 2020. It will remain in their possession until the next conference loss. The Dragons held the Helmet for seven consecutive years from 2013-20. DRAGONS NOTES Junior RB Grayson Thomas became the fifth player in NPHS history to rush for 3,000 career yards last week, as he tallied 166 yards and two scores on 23 carries, including a scintillating 46-yard TD run where he rolled over a defender, got up without touching the turf and carried the ball the last 40 yards to the end zone. Thomas now has 3,032 career rushing yards and 43 rushing touchdowns, both of which rank fifth in NPHS history. He has started the year with four straight 100-yard games, with a high of 187 against Westfield in the opener. The Dragons’ passing game hit the 200-yard mark for the second straight week, as senior Danny Tippit completed 11-of-20 for a career-high 220 yards and three touchdowns against the Marauders. Tippit used the big play, with a 32-yard TD pass to Kyler Kropp, a 45-yard TD strike to Isaiah Thacker and a 16-yard TD pass to Blaine Nunnally - which came one play after a 36-yard connection between the two. It was the first time since Sept. 20, 2019 that three different Dragons caught TD passes in the same game. Thacker and Kropp each tallied 86 yards. Senior WR Isaiah Thacker needs 97 receiving yards to become the ninth player to tally 1,000 receiving yards in a Dragons uniform. He has 903 in two seasons at NPHS and 1,195 for his career. The Dragons’ varsity offense scored on all seven of its possessions last week - five TDs and two Brendan Tanksley field goals. For the first time in 2022, the Dragons did not punt. The Red Rage has forced 11 turnovers so far this season and the Dragons are +10 in turnover ratio. They have held three straight opponents below 100 rushing yards. Senior Eli Hook tallied 11 tackles against Mt. Vernon, his second double-digit tackle game of the year. Senior Eian Roudebush had two sacks and a fumble recovery. Two Dragon seniors - Isaiah Thacker (Ball State) and Luke Burgess (Louisville) - have committed to play collegiately next season. Junior OL Ian Moore is the No. 1-rated offensive tackle nationally by Rivals, who has Moore rated as the No. 1 Class of 2024 prospect in the state and No. 33 in the nation. SCOUTING THE ARABIANS Pendleton Heights is 2-2 after last week’s 35-0 loss at Greenfield-Central. The Arabians are led by a defense that is allowing 248 yards per game, led by DT Sidiki Traore (5 TFL, 3.5 sacks) and LBs Nick Trout (38 tackles) and Eli Arthurh (5 TFL, 3 sacks, 1 INT). Offensively, QB Isaac Wilson has thrown for 144 yards and WR Jalen Jordan leads the Arabians with 143 yards receiving. LOOKING AHEAD The Dragons return home next week for the 55th annual Homecoming game. The Dragons will meet Greenfield-Central. FOLLOW US All New Palestine games are broadcast free-to-listen at NewPalRadio.com. All home games are also video streamed at IHSAAtv.org on a pay-per-view basis. NPHS Athletics is on Facebook (NewPalestineDragons), Twitter (@NPHSDragons) and online (NewPalestineAthletics.com).