The New Palestine basketball team returns home for the penultimate week of the season, hosting Mt. Vernon Friday before traveling to Whiteland for a Saturday contest. 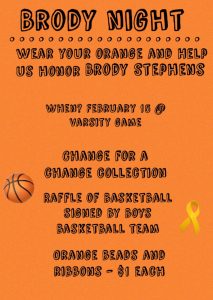 Fans are encouraged to wear orange to Friday’s game vs. Mt. Vernon to honor and celebrate the life of Brody Stephens. There will be a raffle and orange beads and ribbons for sale, as well as a “Change for a Change” collection.

The NP-MV game is a key one in the HHC standings. Both teams enter with one loss and will clinch at least second place in the league with a win, and could clinch a share of the HHC title with a win coupled with a Delta loss to Shelbyville.

It’s also the 75th meeting in the history of the New Palestine-Mt. Vernon rivalry.

Saturday night, the Dragons travel to Whiteland for their final road game of the 2018-19 regular season. It will be NP’s sixth game against a Mid-State Conference school.

Both games – and all remaining New Palestine boys basketball games – will be broadcast on New Pal Radio.

Tonight marks the 75th time the Dragons and Marauders have met since 1963, the longest active series for New Palestine basketball. NP has played Mt. Vernon or one of its predecessors every season of the Dragons’ known basketball history, which dates to 1909. NP is looking for its first win over MV since 2014.

A victory for NP would clinch second place in the HHC for the second consecutive year. A victory combined with a Delta loss to Shelbyville would share the title.

The IHSAA sectional draw will take place at 5 p.m. Sunday, broadcast on IHSAAtv.org. New Palestine and Mt. Vernon both play in the 4A Richmond sectional.

The Marauders are also in the mix for one of the top three spots in the HHC. They have one conference game remaining, next Friday against Yorktown.

This is the fifth of six games the Dragons will play against a Mid-State Conference school. NP is 1-3 against the Mid-State.

Whiteland enters the weekend having dropped six consecutive games since a 63-59 win over Franklin Jan. 18. The Warriors started the year 4-3, including a season-opening win over Mt. Vernon. Whiteland has played one other HHC team, falling 66-55 Saturday at Shelbyville.

Whiteland plays a conference game Friday at Martinsville before hosting the Dragons. This will be Whiteland’s Senior Night.