The New Palestine boys basketball team used a big third quarter Friday to explode to an 84-59 victory over New Castle in the Dragons’ home opener. 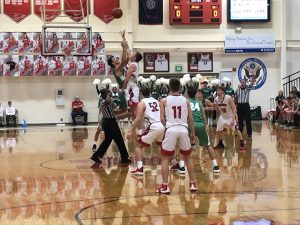 The Dragons led 27-20 at halftime, then opened the third quarter with an 11-0 run to push the lead to 18. Dylan Romine hit a pair of baskets in the spurt and then followed it with a 3-pointer. Matthew True hit back-to-back hoops – including a 3-pointer – after Maximus Gizzi got the run started.

Dawson Eastes, Gizzi and Romine each scored seven points in the third quarter, while True drilled two of his four 3-pointers in the frame and scored eight points in the period.

NP scored 31 third-quarter points to take a 58-35 lead into the final eight minutes.

Four Dragons scored in double-figures, led by Eastes’ 25 points. He scored eight points in the opening half, then helped lead the third-quarter explosion with seven points, including one of the Dragons’ four 3-pointers in the period. He had three dunks and was 7-of-8 from the line.

Gizzi continued his steady play with 21 points, including 4-of-4 from the line.  He scored seven points in each of the two quarters in the second half, including a pair of three-point plays. He and Romine also hit back-to-back triples to help NP stake a seven-point halftime lead. True added 17 points. Romine scored 14 points.

The Dragons hit 10 shots from distance and were 14-of-21 from the line.

Luke Bumbalough led New Castle with 28 points. He was NC’s lone double-figure scorer. The Trojans hit 12 3-pointers, but only six from inside the arc.

The Dragons are back in action Saturday at home against Franklin Central on teddy bear toss night. The JV and freshman games tip at 6 p.m., with the varsity at 7:30 p.m.