The Dragons finished the season 16-5, with their deepest advancement in the state tournament.

The Dragons and Cathedral were tied 1-1 at halftime, but the Irish scored twice in the second half to take the lead.

Earlier in the day, the Dragons defeated Danville 1-0 in the semifinal to advance to the championship game. Olivia Lambdin scored with nine minutes remaining in regulation to give the Dragons the lead, and the Dragon defense made it stand up in the victory. Lambdin’s tally was her 11th of the season.

“The girls played hard tonight despite the loss,” coach Gina Fannin said. “I am extremely proud of every one of these girls and how far they have come. We had a great season and ended on a bitter sweet note. More importantly, Im thankful for the memories that we have created.” 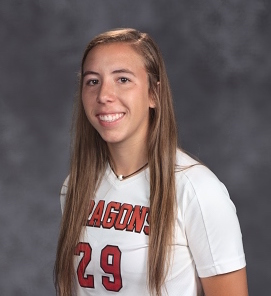 Olivia Lambdin scored her 11th goal of the season in the regional semifinal.